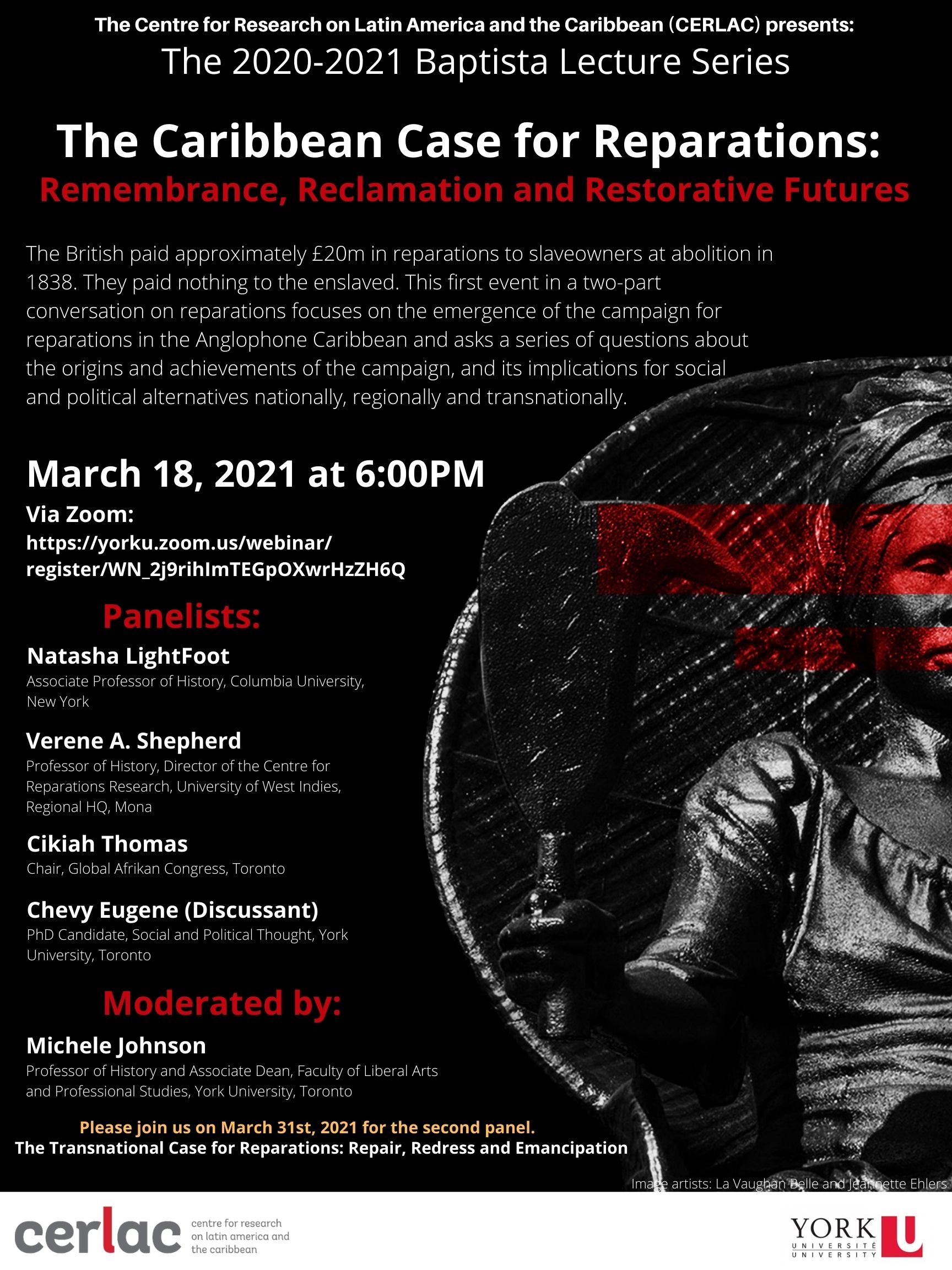 CERLAC presents the third forum in the 2020-2021 Baptista Lecture Series: The Caribbean Case for Reparations: Remembrance, Reclamation and Restorative Futures.

The British paid approximately £20m inreparations to slaveowners at abolition in 1838. They paid nothing to the enslaved. This first event in a two-part conversation on reparations focuses on the emergence of the campaign for reparations in the Anglophone Caribbean and asks a series of questions about theorigins and achievements of the campaign, and its implications for social and political alternatives nationally, regionally and transnationally.
Panelists:
Natasha Lightfoot, Associate Professor of History, Columbia University, New York
Verene A. Shepherd, Professor of History, Director of the Centre for Reparations Research, University of the West Indies, Regional HQ, Mona

All registrants will be sent a link for the webinar

The Transnational Case for Reparations: Repair, Redress and Emancipation.

CERLAC acknowledges its presence on the traditional territory of many Indigenous Nations. The area known as Tkaronto has been care taken by the Anishinabek Nation, the Haudenosaunee Confederacy, and the Huron-Wendat. It is now home to many First Nation, Inuit and Métis communities. We acknowledge the current treaty holders, the Mississaugas of the Credit First Nation. This territory is subject of the Dish with One Spoon Wampum Belt Covenant, an agreement to peaceably share and care for the Great Lakes region.

Panelist Bios:
Dr. Natasha Lightfootis an Associate Professor of History at Columbia University. Her research interests include slavery and emancipation in the Caribbeanand the African Diaspora. Her 2015 book,Troubling Freedom: Antigua and the Aftermath of British Emancipationfocuses on Black working people's struggles and everyday forms of liberation in Antigua & Barbuda after slavery's end.
Dr. Verene Shepherd,author of 7 books,is a Fellow of the Cambridge Commonwealth Society, Honorary Fellow of Jesus College, University of Cambridge and Professor Emerita at The University of the West Indies. She is currently Director of The UWI's Centre for Reparation Research, host ofTalking Historyon Nationwide 90 FM (Jamaica) and Vice-Chair of the UN's Committee on the Elimination of Racial Discrimination.Previously she was a Member, then Chair, of the UN's Working Group of Experts on People of African Descent.
Cikiah Thomaswas an active participant at the United Nations World Conference against Racism held in South Africa in 2001. In 2002, Cikiah was a key planner of the African and African Descendant World Conference Against Racism. The Global African Congress (GAC) was created out of that Conference. Cikiah was elected its chair in 2002 and has continued in the role. The GAC strives to accomplish its goal of equitable distribution of global resources by demanding reparatory justice, advocating for policies that combat institutional racism, and working to ensure respect for all Africans everywhere. As chair of the GAC, Cikiah developed strategies to link with trade unions, youth, women, farmers, students and professionals. Now organized in 20 nations, its constitution is considered by many to be a model for Pan-Africanism in the 21st century.
Discussant Bio:
Chevy Eugeneis a doctoral candidate in Social and Political Thought at York University, where he is completing his dissertation, "Caribbean Reparations: A Radical Creative Imagination Approach." This is the first dissertation-length study of the creative arts as a key instrument in the advocacy for Caribbean reparations for transatlantic slavery and the genocide of the Caribbean's Indigenous populations. Mr. Eugene's research foci are the political economy of reparations in the Caribbean; the role of arts and culture in the development of small state economies; and decolonial praxis in international human rights law.
Moderator Bio:
Michele A. Johnsonis Associate Dean Students in the Faculty of Liberal Arts and Professional Studies and a Professor in the Department of History, York University. She teaches a variety of courses which focus on Black people in the Americas, at both the undergraduate and graduate levels. Johnson's research interests focus on issues of race/racialization, gender relations, labour and cultural productions/performances and have resulted in a variety of publications in areas of Caribbean cultural and social history as well as domestic service in Jamaica and Canada.