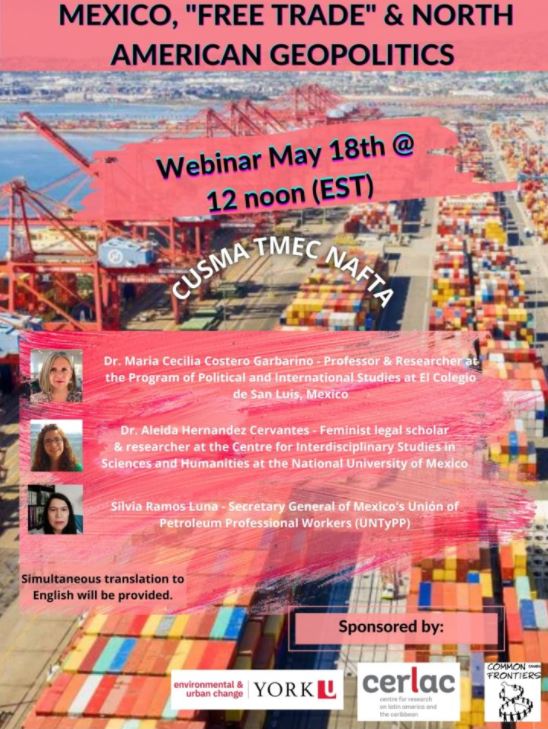 A discussion about CUSMA and NAFTA 2.0 with relation to Canadian mining operations in Mexico, Mexico's labour reform and its gendered implications, and the conditions surrounding the nationalization of the Mexican energy/petroleum sector. With analysis of the new geopolitical landscape in Mexico and implications for the region.

Dr. Maria Cecilia Costero Garbarinois a Professor and Researcher at the Program of Political and International Studies at El Colegio de San Luis, Mexico. Her areas of expertise include NAFTA and its renegotiation and the geopolitics of Canadian and US investments in Mexico. Her current research includes privatization associated with Canadian mining in Northern Mexico, including its impacts on women.

Dr. Aleida Hernandez Cervantesis a feminist legal scholar and researcher at the Centre for Interdisciplinary Studies in Sciences and Humanities at the National University of Mexico (UNAM) whose area of expertise centres on economic globalization and its effect on social and labour rights. She is the author of a 2021 report on the TMEC/CUSMA (NAFTA 2.0), gender equality, and the Mexican labour reform under the Canada-US-Mexico Agreement.

Silvia Ramos Luna is the Secretary-General of Mexico'sUnión of Petroleum Professional Workers (UNTyPP). UNTyPP has been organizing in opposition to the privatization of Mexico's energy resources for 30 years.

Panelists will present in Spanish with simultaneous translation to English.

Co-sponsored by CERLAC and Environmental & Urban Change at York University and Common Frontiers.