Beyond Repair?: Mayan Women's Protagonism in the Aftermath of Genocidal Harm 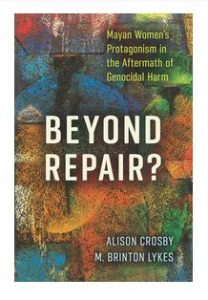 Beyond Repair? explores Mayan women’s agency in the search for redress for harm suffered during the genocidal violence perpetrated by the Guatemalan state in the early 1980s at the height of the thirty-six-year armed conflict. The book draws on eight years of feminist participatory action research conducted with fifty-four Q’eqchi’, Kaqchikel, Chuj, and Mam women who are seeking truth, justice, and reparation for the violence they experienced during the war, and the women’s rights activists, lawyers, psychologists, Mayan rights activists, and researchers who have accompanied them as intermediaries for over a decade. Alison Crosby and M. Brinton Lykes use the concept of “protagonism” to deconstruct dominant psychological discursive constructions of women as “victims,” “survivors,” “selves,” “individuals,” and/or “subjects.” They argue that at different moments Mayan women have been actively engaged as protagonists in constructivist and discursive performances through which they have narrated new, mobile meanings of “Mayan woman,” repositioning themselves at the interstices of multiple communities and in their pursuit of redress for harm suffered.

ALISON CROSBY is an associate professor in the School of Gender, Sexuality and Women’s Studies and the director of the Centre for Feminist Research at York University, Toronto, Canada.

M. BRINTON LYKES is a professor of community-cultural psychology and co-director of the Center for Human Rights and International Justice at Boston College, in Massachusetts. She is the author or editor of several books, including The New Deportations Delirium: Interdisciplinary Responses.