The book publishes 199 unpublished funerary inscriptions from Augusta Emerita (Mérida) and corrects the published editions of another eight texts. This is accompanied by six analytical chapters, examining the history of archaeological research on funerary areas in Mérida; the archaeological contexts of the inscriptions; the typology of the monuments; the nature of the Latin, formulas and letter-forms used for the epitaphs; and the social context of those who were commemorated or who dedicated the monuments. 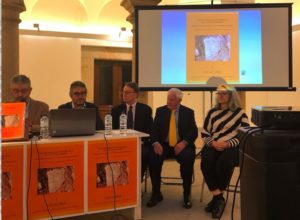 There was a pre-publication launch for the book in that different world before the pandemic on 13 February 2020 and here is a picture from that launch, showing Jonathan with his co-authors, Luis Ángel Hidalgo Martín, José Luis Ramírez Sádaba and Juana Márquez Pérez and, on the far left,  the Director of the Consorcio de la Ciudad Monumental de Mérida, Félix Palma

Many congratulations, Jonathan, on this accomplishment.