On Jan. 28, Uzma Jalaluddin came to the Canadian Writers in Person reading series at York University to talk about her novel Ayesha at Last. 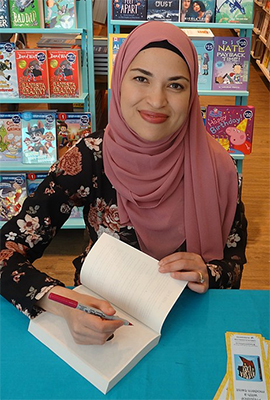 Uzma Jalaluddin at a recent signing of her book, Ayesha at Last.

Jalaluddin told the audience that one of the reasons she wrote Ayesha at Last, a book that is “unapologetically Muslim,” is that she wanted to tell a different Muslim story about love and community. “When you have few stories told about marginalized communities, you see the same story again and again. You don’t have diversity,” she said.

Ayesha at Last, a Muslim romantic comedy, tells a different story. It is “the first romance about Muslims published in Canada,” the writer says. In it, Jalaluddin deconstructs the idea of what Muslim masculinity looks like.

Carrianne Leung is coming to the Canadian Writers in Person reading series on Feb. 11, to talk about her book That Time I Loved You.

Readings are free and open to any member of the public.

For more information, contact Professor Leslie Sanders at leslie@yorku.ca or Professor Gail Vanstone at gailv@yorku.ca. All readings are held Tuesdays from 7 to 9 p.m. in room 206, Accolade West Building, Keele Campus.