Retirement in Japan and South Korea

Retirement in Japan and South Korea 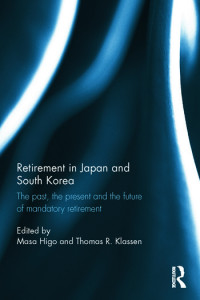 This book, written by Thomas R. Klassen analyses reforms to retirement policies in Japan and South Korea, especially in the context of rapid population ageing. A defining feature of the labour markets and workplaces in these two nations, and the lives of workers and families, is involuntary retirement at relatively young ages. The book explains past developments and recent reforms of retirement policies both in the two countries, as well as in a cross-national comparative manner. At the core of the book is an examination of the social, economic and political conflicts around retirement, such as between younger and older workers, between employers and governments, and between employers and workers. The policy recommendations offered apply not only to Japan and South Korea, but also to other nations such as China.

The volume is of value particularly for those interested in labour markets and workplaces, population ageing and contemporary East Asia, in addition to those studying retirement and pensions. Policymakers, business leaders, worker organizations, researchers and students will benefit from the insights about the past, present and future of retirement.