Competencies and Outcomes in Moodle (eClass)

I've been looking for ways to tie in course learning outcomes to a course on eClass (Moodle).  While the Outcomes framework on eClass is an appealing candidate for this, it seems to require manual grading and interventions to work.  After suggestions from Profs Mojgan Jadidi and Melanie Baljko who had previously used it, I've switched over to examining the Competencies system within eClass to accomplish this.  Here's a test using an instance of eClass.

Unlike the Outcomes system, which can be set up completely by individual instructors within their course shell, the Competencies system requires an adminstrator to upload the list of characteristics.  This is described in https://docs.moodle.org/39/en/Competencies.  Here you can see the option for uploading a competencies list.  The goal will be to convert the existing "curriculum map" spreadsheet that we use internally in the Lassonde School to populate these competencies. 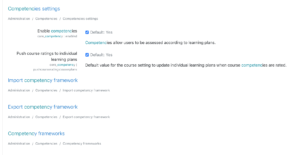 Here are some of the server administrative settings for competencies.

The simplest example is to show that an activity is completed if the student clicks on a web link.  Then, once it's complete, the student receives the competency.  Here is how you do it:

You can then ask for a "competency report" for an individual student.  This is different than an activity completion report.  Here it is:

competency report for a student

Here we show auto-grading and auto-competency assignment for a simple H5P fill-in-the-blanks activity.

While the goal is to use our own home-grown learning outcomes / competencies, I started off by using other schools' competency lists (in CSV format from the Moodle organizers).

Then I created a simple interactive H5P activity that would auto-grade (into the Grade Book) and assign a competency upon the grade being done (so, automatically).  It worked.  Here is the sequence in screenshots: 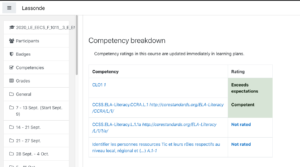 The competency is shown to be "not rated" until the student undertakes a relevant activity. 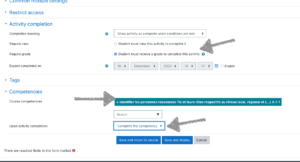 Set up the activity so that it is only marked as complete if it receives a grade and then gets marked as a competency once that happens.

It's not complete unless they do the activity.

Student filled in the blanks correctly.

Student got it right, so it's marked as completed. 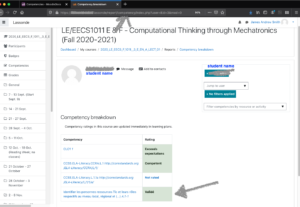 So, a simple H5P activity works. 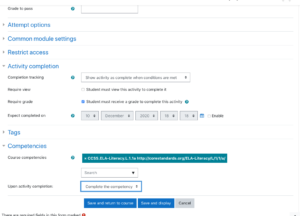 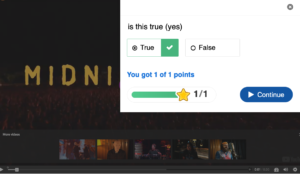 the student gets the question in the video correct. 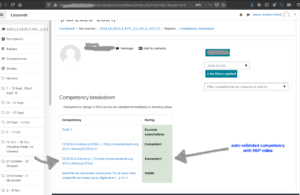 With the activity completed and a grade assigned, the competency is assigned to the student.

4. Setting up auto-assigned competencies (2 attempts on a video)

In this example, an H5P interactive video with three true-false questions, the grade is out of 1 and it takes 0.5 to pass.  Each question is equally weighted, so if two out of the three are wrong, the student will fail the assessment.  In the first attempt, the student gets one out of three correct, so does not get a completion nor a competency assigned.  In the second attempt, the student gets all three answers right and so get both the completion and competency: 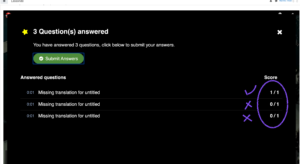 The student's first attempt on the interactive video. Only one out of the three answers is correct. 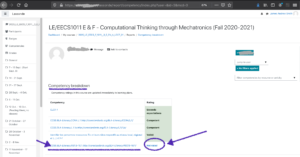 The student didn't complete the activity on the first attempt, so no competency is assigned.

On the first attempt, with only one out of three right, the student doesn't get a completion on the activity.

Student's second attempt. The student gets three out of three right on the interactive video

The student got all three questions right, so the completion tracker is checked off. (A grade of 1.00 was also assigned in the Grade Book) 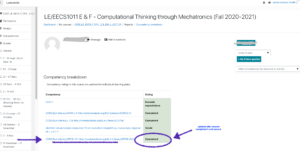 With the activity completed, the competency is assigned.

Next, I need to figure out how to convert the existing curriculum map we have for Lassonde into a format that is recognized by Moodle's competency system (e.g. https://archive.moodle.net/mod/data/view.php?d=12&mode=single&page=9)

What else is left?  How to generate a competency list for the whole class, not just an individual?  Like the grade book?

If I can get both of these working then this may be a viable, sustainable way to help instructors be explicit about which learning activities are associated with which learning outcomes.

First attempt didn't work out well.  Trying another attempt by modifying an example from the Moodle site for a pre-calculus curriculum: 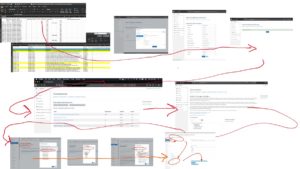 So, it's not just a question of changing the labels... the descriptors need to change too because the populate the drop-down menus within Moodle (they're what the instructor will see, not the labels)

Make sure to change the ID number and short name:

update your ID number and short name before importing again.

James Andrew Smith is an associate professor in Electrical Engineering and Computer Science Department in York University's Lassonde School.  He lived in Strasbourg, France and taught at the INSA Strasbourg and Hochschule Karlsruhe while on sabbatical in 2018-19 with his wife and kids. Some of his other blog posts discuss the family's sabbatical year, from both personal and professional perspectives.