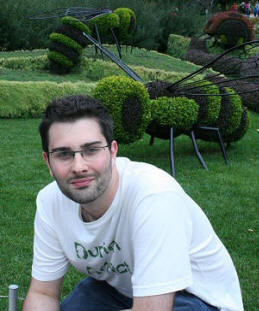 Although my interests in the natural world are large and varied, I am most passionate about studying the diversity of insects and other terrestrial arthropods. My master's research focussed on the restoration ecology of a bee community in southern Ontario, and my current PhD work is mostly in bee biosystematics. During my master's, I developed a special interest in kleptoparasitic bees (also called cuckoo bees), which rob their host bees of nesting resources. The taxonomy of many kleptoparasites remains undescribed, which is unfortunate since they are among the first bees to respond to ecosystemic disturbance and therefore potentially valuable bioindicators of the state of the environment.

I am currently revising the parasitic apid genus Epeolus, which is widespread across the globe and an interesting group for the study of kleptoparasitism as its constituents are heavily specialized on their hosts in the genus Colletes. I aim to revise the genus Epeolus for Canadian and ideally North American species. I then plan to create phylogenies for Epeolus and Colletes. My ultimate goal is to determine if host-parasite co-speciation occurred and if coevolution was a mechanism that led to diversification in these groups, a hypothesis that in bees has never been tested before. 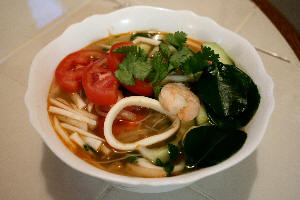 Heat the oil in a pot and add the chili sauce, cook over medium heat until fragrant. Stir in the galangal or ginger, and garlic, and cook for an additional minute. Add the stock, lemon grass, and fish sauce, and bring to boil. Reduce heat and add the vinegar and rice noodles. Just before noodles are fully cooked, add the chopped onion, celery, and carrot with the seafood and lime leaves (do not overcook the seafood). Remove heat once seafood is cooked and serve in bowls with a slice of lime and cucumbers, tomatoes, cilantro, Thai basil, and green onions.

To come, as I have years of research ahead of me still...