Research in my laboratory is diverse, but all aimed at increasing humanity's understanding of bee biology.

The main areas of research that are going on in my laboratory at present, along with the names of lab. personnel whose work primarily fits in that area, are enumerated to the right. Elsewhere on this website you will find them explaining what they do in their own words.

My own research primarily involves the systematics of the bee subfamily Xeromelissinae - an obscure, but fascinating group of bees, restricted to the New World south of central Mexico. I have also expended considerable energy leading the global campaign to barcode the bees of the world. I also consider that promulgating the importance of bees is an essential part of my work. For genetic reasons, it seems that bees are more extinction prone than are almost all other organisms (see Zayed and Packer (2005)) and they are important. This resulted in my writing a moderately popular book on bees 'Keeping the Bees' published by HarperCollins in 2010.

A major goal of my work is to increase the taxonomic breadth of the bee collection at York University. This is now probably the largest bee collection in Canada; it has specimens from over 100 different countries and over 80% of the world's bee genera are represented.

Bee systematics and taxonomy (including barcoding): Tom Onuferko, Rafael Ferrari and Genevieve Rowe. For examples of our morphological systematic/taxonomic work see Almeida et al. (2008), for an example of barcoding results see Sheffield et al. (2009), for a critique of attacks against barcoding see Packer et al. (2009). For comparative morphology (which is a lot of fun to do) see Packer (2003) and Packer (2004). For examples of our illustrated user-friendly keys, see our Bee Resources section.

Bees as pollinators: Hien Ngo- coffee pollination, Miguel Verran- raspberry pollination. Work specifically done on this topic in my laboratory has been submitted.

Bee conservation: Mariya Cheryomina is working primarily on bumble bee conservation. See Colla and Packer (2008) for an example of this work.

Bee sociobiology: No students actively involved in this work at present, although Jennifer Albert recently completed an M.Sc. on the topic and one paper from this has been published. Some past successes in this area are Packer and Owen (1994) and Richards and Packer (1994).

Bee biogeography: While all systematics and taxonomic research has a biogeographic component, James Postlethwaite's M.Sc. research is primarily biogeographic: he is investigating the impact of the surprisingly narrow junction between primarily winter to predominantly summer rainfall in the Atacama Desert. See Praz and Packer (2014) for a recent example of biogeographic analysis in a phylogenetic context.

Bee biodiversity surveys: Alana Taylor, Natalia Veiga. For examples of past work on this see Chan and Packer (2006). 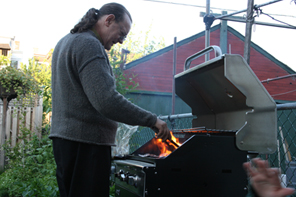 Although my work has always concentrated on bees, in the past, I have supervised students who worked on beetles (Hume Douglas), butterflies (Jeremy Kerr) or performed vegetation surveys (Pak Kin Chan).

I am unlikely to take on any more students who want to study organisms other than bees. It's not that I did not appreciate the efforts of those three, or enjoyed working with them; it's simply that bees are so important, so diverse and the number of different research areas concerning them that we study in my laboratory so large, that there is not enough time or money for me to supervise students working on anything else.

People working in my laboratory soon realize that they have considerable intellectual freedom to pursue whatever aspect of bee biology that interests them (unless their funds come directly from a more narrowly focused source - the barcoding taxonomists were funded from barcode funds - they had to do barcoding). A drawback of this is that they will rapidly become far more knowledgeable about that area of research than I am and outstrip my capacity to provide entirely knowledgeable advice.

The benefit that I think students get from working in my laboratory is the diversity of different areas of bee research that they can discuss on a daily basis, at least with each other. Another advantage may be that I often do not appear as a co-author on my student's research papers.

However, in recent years, the diversity of research ostensibly taking place under my supervision has extended me beyond my comfort zone in so many directions that there have been times I expected I would soon explode. Consequently, I expect to focus somewhat more narrowly in the future with emphases on bee systematics and evolution.

I have done lots, at departmental, university, national and international levels.

I was co-chair of the Arthropods Specialist Subcommittee (with Paul Catling) of the Committee on the Status of Endangered Wildlife in Canada (COSEWIC) from 2007-2012.

I also run the bee barcoding campaign of the Barcode of Life enterprise, with Fernando Silveira as co-chair and numerous collaborators worldwide.

From 2011-2014, I was a member of NSERC's evaluation group for evolution and ecology.