During my 2018-19 sabbatical year I worked with colleagues at engineering schools in Strasbourg, France and Karlsruhe, Germany.  These schools have well-developed exchange programs and wished to establish an exchange program with York University.  I had many productive and insightful conversations about ideas, challenges and opportunities for exchanges with Angelika Hammann and the staff in the international office at INSA, Klemens Gintner (HsKa; Mechanical, Mechatronics, Automotive), Marc Vedrines (Mechatronics), Gilbert Ferhat (Geomatics), Carmen Vasile-Muller (Fluids, HVAC), Renaud Keifer (Electronics, Mechatronics), Bertrand Boyer (Electronics), and others.

An exchange between York in Canada, INSA in Strasbourg, France and HsKa in Karlsruhe would be really exciting for engineering students in all three countries. 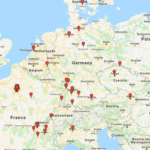 Some of the European universities that Waterloo students embark on exchanges with.

Because of the CEAB accreditation process there is typically a perception by Canadian academics that exchanges are not possible.  This is definitely not the case.  In fact, Engineers Canada corrected me on this point.  Schools like Waterloo and the Polytechnique in Montreal have long-standing exchange programs with schools in France and Germany.

One possibility for a three-way exchange partnership is as follows, from the perspective of York University students. York University students (ex: Electrical Engineering,  Civil, Geomatics, Mechanical) could go to Strasbourg, France in January of their third year, starting in the 6th semester of a typical Canadian undergraduate degree. They would fly out to Europe in December or very early January, getting their bearings and taking intensive French language courses prior to the beginning of the French semester in early February.  They would then take engineering courses related to their programs picking from existing courses from the 2nd, 3rd or 4th years of the five year French engineering program.  These courses tend to be very hands-on and class sizes are very small compared to York (12 - 15 students was typical when I taught lab courses at INSA).  Some classes are being conducted in English as proficiency in English a now a graduation requirement for INSA students. Growing. It's all about "grandir."

Once the French semester is done (late May/early June) the York students would switch to focus on Karlsruhe, in Germany.  The school administrators in Karlsruhe suggest that there are three possibilities for York students: summer engineering classes, involvement in research lab work and/or co-op work with German engineering firms.  For instance, students could take two to four months worth of engineering classes (in English) over the summer, followed by an eight month co-op term.

Currently, the Lassonde School at York has an exchange program for computer science students with a university in Germany and one in Greece.  It works well for our computer science students, but it is was never designed with engineering students in mind.  Likewise, York's Glendon campus has an existing program set up with the University of Strasbourg, adjacent to INSA, but it is not appropriate for our engineering students. This York-INSA-HsKa concept would offer a unique opportunity for our students to experience hands-on engineering courses with co-op job experience.

Curious about the universities in Strasbourg and Karlsruhe? You can view my Twitter postings from about Strasbourg (INSA) and HsKa (Karlsruhe).