During my sabbatical year in Strasbourg, France, I took both German and French language classes.  This blog entry is about the French course I took.

Before getting into the details about how I took French lessons during my sabbatical, here is some background.

We chose to raise our kids as francophones in Toronto. They went to French (not immersion) daycare and are all enrolled in CS Viamonde (the French public "TDSB equivalent" board) schools. We speak French at home, even though it would be easier for us just to do everything in English.

My wife decided that we would spend our sabbatical in a French-speaking country, hence the reason we went to France. Strasbourg, which straddles the French-German border, on the Rhine River, gave us the right French milieu while also giving us access to our favourite country in Europe: Germany.

The students of the international school in Strasbourg France learned in many different ways, in French, English, German and Polish.

Our kids went to a French public International school (Conseil Des XV). Strasbourg, being the second capital city of Europe, has many professional from all over, so there are several international schools that help serve the children of these multi-lingual groups. My eldest son would come home from his school with a tonne of homework, much of it challenging my knowledge of French grammar. I realized that it was time to improve! Classes at the Universite populaire in Strasbourg, France

Strasbourg offers "Adult Ed" at the Université Populaire (similar to the German Volkshochschule system). I wrote an online test placing me around a B2 level -- generally fluent. I then signed up for a twice-weekly night class that caters to the foreigners who, for example, work as lawyers at the Human Rights Council, researchers at the hospital, engineers at local factories, etc.

I approached this course differently than I generally approach class. I didn't care if I passed the course and didn't care what the teacher or my fellow students thought of my grammar or accent. No matter the degree to which I would improve, I just wanted to get better.

There's a freedom and a joy that comes from true intrinsic motivation and a sense of the importance of the material. I bought supplementary material; I did my homework every day; I came to class prepared; and I didn't care what my grade would be. My teacher, Joelle, had a keen sense for the French language, both the rules and the nuance. In her 60's, she had a no-nonsense approach to teaching, having distilled most of the important contextual rules into a few pages that have grown faded from dozens of photocopy generations. These "petits papiers" provide the contextual and usage information lacking from standard references like the Bescherelle.

It's fair to say that Joelle is a very opinionated woman and she often used those opinions to keep the conversation lively. The generational divide and the fact that she was the only French citizen in a room full of educated immigrants (engineers, lawyers, and technicians from countries like Brazil, Germany, Romania and Slovenia) kept the conversations unpredictable and interesting. 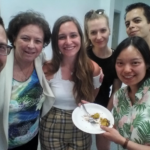 My teacher and classmates.

I really enjoyed the class.  The grammar lessons were often as enlightening as the Joelle's stories about Strasbourg architecture; sometimes as frustrating as her thoughts on Brigitte Bardot and the Canada seal hunt.  As we worked out our issues with the French language, she reassured us that very few native French speakers truly master la langue de Molière.  To practice my French I was asked to give a presentation on Canada to the class.  My 15 minute Powerpoint on my family's 2018 cross-Canada road trip turned into an hour-long conversation about Canadian cultures, peoples and food.

We celebrated our last class over a couple of bottles of bubbly crémant and Wagner's pear cake.  It was a very typical French and Alsatian way to wrap things up.  As we talked about our summer plans and sipped our Alsatian champagne  I reflected on what I had learned beyond conditionnel verbs. Perhaps the single biggest take-away was that learning is most effective when it is grounded in intrinsic motivation.  My challenge will be to figure out how to work that paradigm into the classrooms at York University.