Virtual Programming Lab is a plugin for Moodle (eClass at YorkU) that permits interactive programming assignments to be made for students.   There are some really good examples at Smith College on how to set it up with Python and a few with Java and C. 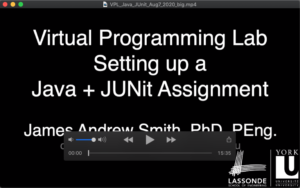 I've posted, on YouTube, an example of how to set up a Java assignment using a JUnit testing framework on the Moodle (eClass) platform at York University.  We should be encouraging students to use JUnit in their own program development and using it within the VPL system, even if the students can't see the JUnit aspect directly is entirely consistent (practice what you preach, eh?)

Settings for the VPL are available once you have placed a VPL assignment in your Moodle course page.  Once it's been placed, click on the assignment and find the gear icon. 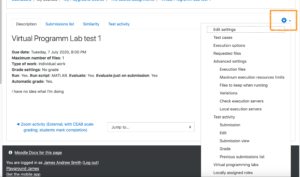 set up details about the VPL assignment 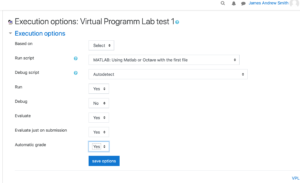 Options for the VPL assignment with Matlab/Octave

You need to set up test cases. 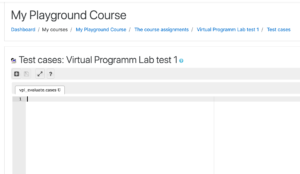 Here's an example of how to do it with Python.

When I set it up and try to run the example... I get a terminal window that doesn't do much... 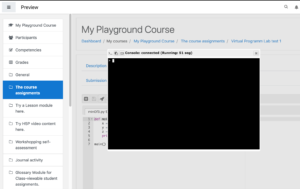 terminal window shows up upon running ...

Work has been proceeding on the Moodle Preview site here at York.  I've been able to run through a number of the Smith College VPL tutorials and they're looking good.

It looks like it should be able to work for Python, C, x86 Assembler and Java. 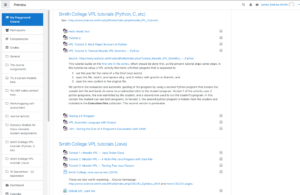 Tips and tricks for scripting in VPL.  Could Microchip's MDB "debugger/simulator" be accessed in VPL?

James Andrew Smith is an associate professor in Electrical Engineering and Computer Science Department in York University's Lassonde School.  He lives in Toronto, Canada.  While on sabbatical in 2018-19 with his wife and kids he lived in Strasbourg, France and taught at the INSA Strasbourg and Hochschule Karlsruhe and wrote about his personal and professional perspectives.  You can find him on Twitter.