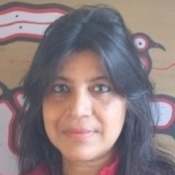 I study the properties of the neutrino, the least understood of the fundamental particles in our universe, but one that plays a key role in unsolved problems in particle physics and cosmology. Lately, I have been doing so as a member of the T2K experiment in Japan. The consequence of the breakthrough discovery that neutrinos have mass (by the experiments SuperK in Japan and SNO in Canada), contrary to the assumption in the Standard Model of particle physics, gives rise to quantum mechanical mixing among the 3 known neutrinos, encoded in matrix form. One of the goals of T2K was to determine the last unknown parameter in this matrix, theta_13, which is accessible by studying the transformation of muon neutrinos to electron neutrinos (so-called “neutrino oscillations”). At T2K, beams of neutrinos and anti-neutrinos are produced from protons hitting a graphite target. Precise monitoring of this proton beam is essential for understanding the neutrino flux, which is an input parameter for physics studies. I have worked on one of the monitoring devices, an Optical Transition Radiation (OTR) detector, which is critical for measuring the proton beam characteristics in the high radiation environment near the target. The most important outcome of our experiments so far is a measurement that theta_13 is non-zero and relatively large, for which the T2K team was awarded a prestigious prize by La Recherche, a French science magazine. Our results show a way forward to investigate whether neutrino physics holds the key to why our universe is made only of matter, despite matter and anti-matter being produced equally in the Big Bang. We plan to investigate the origin of the matter/antimatter asymmetry by comparing results from data collected with neutrino and anti-neutrino beams.