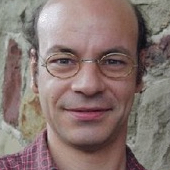 Atmospheres of Earth and Mars; Applications of lasers to remote sensing (LIDAR); Laboratory simulations of the Martian environment.

I specialize in the study of the atmospheres of Earth and Mars, primarily compositions, climate, and dynamics. To further atmospheric measurements, my group develops and applies laser remote sensing (or LIDAR) instruments for use from the ground, from aircraft, and on Mars. I led the design, testing, and implementation of a LIDAR system on the Phoenix Mars Lander to measure the distribution of dust and clouds. It resulted in the discovery of snow falling from Martian clouds. The next generation of Mars LIDAR will be directed at the surface of Mars to detect the deposition of water. It is being tested in a chamber that simulates the environment on Mars. Scientific progress is already being made with the finding that water can condense out of the atmosphere onto salts on the surface of Mars. To measure ozone, clouds, and aerosols in the Earth’s atmosphere, we have built a LIDAR system for installation on various aircraft. Recently, it was installed on the Polar-5 aircraft (DC-3) and on the Amundsen icebreaker for measurements of the impact of sea ice on air chemistry and ozone. Another recent field campaign has involved installing a LIDAR instrument on a Twin Otter aircraft for measurements of air pollution form the oil sands industry in northern Alberta.