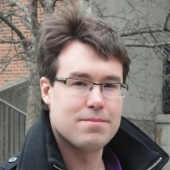 My research interests lie in the planetary sciences, particularly planetary atmospheres and interactions with planetary surfaces. Questions that I address span the solar system, from Earth to Mars to Comets to Ceres to Giant Planets and their icy satellites. For example, how is it that Mars went from being a warm and wet world in the ancient past to the dry and frozen desert world of today? How is it that an icy body like Enceladus can geyser water droplets out into space, and what can that material tell us about the ocean that lies within? In order to find answers to such questions, it is necessary to send spacecraft out to explore and to establish ground-based facilities to interpret returned data.

I am currently supporting Surface Operations on the Mars Science Laboratory Rover (Curiosity) and developing planetary simulation facilities at York University as part of the Planetary Volatile Laboratory. Previously, I have led experimental studies into interactions of volatiles with the Martian surface and polar caps. After my training with the Mars Exploration Rovers, I worked on the Huygens probe to Titan and I also participated in the development of the Surface Stereo Imager for the Phoenix Mars Lander. Also, I have been involved in several conceptual space mission design studies and analogue planetary missions. I have experience modeling scattering in the atmospheres of Earth and of Mars from the ultraviolet into the near infra-red and dynamical modeling of the Martian atmosphere. Recently, my work has led to the first direct detection of fog on Mars, to estimates of the methane content of the martian atmosphere from exogenous sources, and to an understanding of the origin of ridges of ice on the surface of Pluto.