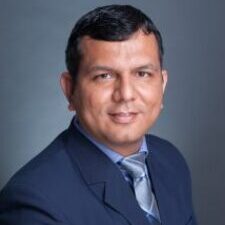 Arun Pathak, a Chartered Accountant who immigrated from India, was clear about the two important things he had to acquire for achieving professional success in Canada.

First was to get knowledge of Canadian law and taxation and then acquire related Canadian credentials. “I came with the experience of working for four big financial firms and that too in different countries. But that didn’t matter much as I did not have Canadian education about accounting and audit.”

Every country has different laws, system and practices. Getting an education to learn them is the shortest and fastest way to integrate into the workforce, says Arun.

After shopping around for a program that suited his needs, he zeroed in on the York University bridging program for internationally educated professionals because it had Jumpstart and foundation courses which gave general ideas of many things Canadian.

Though today he works as an auditor with an accounting firm, things were not easy for two to three years, he says. “I was frustrated and felt like giving up. It was my wife who helped me remain focused and motivated.”

He first found a short-term contract job as an accountant and then he was hired by a partner in an accounting firm on a project work basis. This led to another contract to work on another project and he now continues to work with the same firm.

Initially, when he tried to get Canadian knowledge and experience through volunteering, it had its toll on family time and household finances. “But I kept myself strong and tried to look for opportunities anywhere in my professional field,” he says. “I also did some other courses to make my resume stronger.”

The bridging program helped a lot in becoming job-ready, says Arun. “The foundation courses and the electives that I took helped me understand Canadian work culture and improved my communication skills in a professional context. I gained a lot of confidence and was able to actively participate in client meetings. My new found confidence was clearly visible and helped me in building my brand.”

“But there were many challenges. Managing a job, studying at the university and taking care of young children, because my wife had started working to support us, was not easy.”

It was difficult to take out time to complete assignments and study for exams. But he was aware that it was important to complete the bridging program and was totally focused on it, he says. “Time management was key to manage things.”

A firm believer in upgrading knowledge and education, Arun says all immigrant professional should take advantage whenever an opportunity like the bridging program at York University, is available to them.

The program is partly or as in his case, completely funded by the government and was a great opportunity to upgrade skills, he says. “I took Tax and Assurance courses which helped me in upgrading my skills professionally.”

“The courses I took at York University IEP program helped me to integrate my past experience and knowledge with the Canadian audit and taxation practices,” says Arun. “As I was doing this course, my employers saw that I was updating my skills and knowledge of Canadian law and taxation.”

He also mentioned an instance where knowledge gained in the IEP program proved helpful in his personal life too.

“My car was damaged in an accident and my mechanic was charging more than 20 per cent variance of estimated amount. In the law and ethics course at York, I had studied that as per Ontario law one cannot quote a rate that is more than 10 per cent in variance. Because I knew it, I told the mechanic about this and he adjusted the amount.”

Arun’s next objective is to qualify as a Canadian CPA and launch his own CA firm. “I would like to help new immigrants by employing them. And I would also encourage them to study in the Canadian system as it gives a good perspective of their professional field in Canada.”