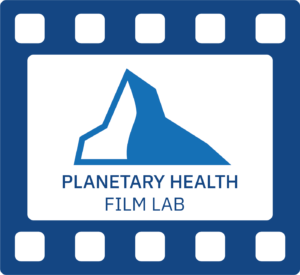 This year's Planetary Health Film Lab saw a group of Indigenous youth from the Canadian north work on telling stories related to environmental issues in their communities. They worked throughout the summer shooting interviews with local residents, researchers, planetary health experts, and elders as well as capturing some stunning photography of their beautiful lands.

The stories that emerged share a common theme: water. Serra Black's film, The Price of Gold, addresses the careless disposal of arsenic into the local drinking water supply and the mighty Mackenzie River in Yellowknife, NWT. Christopher Akiwenzie's film, Adikameg and Ice, addresses the decline in fish populations due to warming water temperatures, which is impacting the food supply in his community in Georgian Bay, Ontario. Emily McCallum's film, Will There Be Another Rainy Day?, examines the impacts of a drought experienced in and around Barrie, Ontario. Emily interviews local residents about declining fish populations in local lakes and shows dramatic footage of dried-up vegetation, mills, and rivers. Jessie Yakeleya's film, In the Future, That's What's Going to Happen, I Think, shows both past and present images of the tradition and importance of launching communal canoes in Tulita, NWT, and suggests that climate change may drastically alter this community practice.

All participants benefitted from online training with project co-lead Mark Terry, who ran a series of Zoom meetings every two weeks throughout the summer. This online training provided technical support and creative guidance leading up to a four-day remote workshop held in mid-August, which featured 12 presentations from experts in the fields of Indigenous studies, documentary filmmaking, impact producing, planetary health, and United Nations youth engagement.

The films produced this year have been added to the UNFCCC’s Youth Climate Report GIS map, a database of more than 560 short films produced by youth around the world. The films will be screened at the United Nations climate conference, COP26, taking place from November 1 to 12 in Glasgow, Scotland; at the Association of Canadian Universities for Northern Studies Conference at York University from November 3 to 5, 2021; and at the UNESCO World Higher Education Conference, May 18 to 22, 2022, in Barcelona, Spain.

View all four films screened at this year's Planetary Health Film Lab below:

By the end of the program, participants are expected to have learned:

Participants will create short documentary films about planetary health and the impacts of climate change on human health and wellbeing in their community. General themes are Planetary Health, Global Health and Humanitarianism, Global Health Foresighting, and the Sustainable Development Goals. The films may tell a narrative and/or communicate research which touches on any of the following:

James Orbinski, MD is the director of the Dahdeleh Institute for Global Health Research. He is the founder and co-lead of the Planetary Health Film Lab.

Deborah MacDonald, BA, MA is the Senior Research Associate and Manager for the Young Lives Research Lab (CANADA). She is the research Co-Investigator for the Planetary Health Film Lab.

The Planetary Health Film Lab is a collaboration between the Dahdaleh Institute for Global Health Research, the Young Lives Research Laboratory, Planetary Health Alliance, and the Youth Climate Report.

The 2021 edition of the Planetary Health Film Lab is made possible by a grant from the Hunter Family Foundation.

Seven emerging filmmakers from six countries came to the Dahdaleh Institute in Toronto from 16 - 22 February 2020 to participate in the Planetary Health Film Lab. The Film Lab took these young filmmakers through an intensive five-day process to create a film which tells a story about the health impacts of climate change.

The Winter 2020 cohort of youth were the workshop’s first. The group includes environmental activists and emerging filmmakers from Canada, Australia, Ecuador, Colombia, India, and Italy.

Members of the Dahdaleh Institute collaboratively wrote the statement Addressing structural racism and violence within global health. The statement reflects...


Read more about this resource

Over the summer, the Dahdaleh Institute worked with exceptional students through our Internship Program, which is founded in an experiential...

Dahdaleh Institute member Mark Terry has recently been feature in the cover story of the January issue of the renowned...