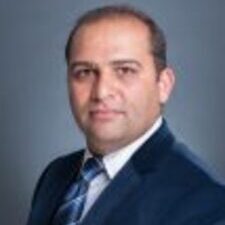 Commercial banker discusses his journey from Dubai to Canada

A study in similarities and contrasts
For Yaser Feizi, the underlying business fundamentals of his role as a Commercial Account Manager at the Royal Bank of Canada (RBC) are more or less the same to his role as a Business Development Manager in commercial banking in Dubai, but everything else, including the journey to land the banking position in Canada, has been quite different.
Born in Iran, Feizi moved to Dubai as a teenager, where he went to university and later landed his job in commercial banking. As a Business Development Manager in commercial banking in Dubai, Feizi brought the worlds of finance and commerce together, finding new clients and providing them with financing support.
After 17 years in Dubai, Feizi decided to move to Canada along with this family.

Initial job search a challenge in Canada
Despite arriving in Canada with a university degree and commercial banking experience, cracking the Canadian job market was a challenge.

“I chose Canada because of the multicultural environment and the fact that they’re very warm welcoming newcomers,” says Feizi. “After moving to Canada, I found many of the values I sought but also uncovered many challenges in the new environment, both in terms of the workplace and education. There were so many new things and a potential language barrier, too.”

Yaser already new three languages before coming to Canada and had some background in English from studying at Dubai College, so upgrading his language skills came fairly quickly.

Learning everything he could about Canadian culture and bridging gaps
Feizi moved quickly to discover the Canadian business environment. He took a bridging program from Humber College, learning about leadership and management. From Seneca College, he discovered the Canadian world of entrepreneurship.

But he actually found the York University Bridging Program to be the most effective for his needs.

“When I put the York University program on my resume, I felt there was a change in the way employers read my resume,” says Feizi. “When you say you’re an internationally educated professional and employers see that York has qualified you for their program, they also seem to see you differently and also understand that at York, you’re adding Canadian course material to supplement your international degree. It’s a difference maker.”

Employers often don’t know how to evaluate foreign credentials or if they have the same qualifications.

Prefoundation language skills at York helped Feizi to further refine his English skills in terms of writing and speaking. Networking and mentoring also were very helpful in preparing and making connections. Finance and business law courses at York University also filled in some gaps.

Making a connection at RBC
Feizi happened to meet Vivian Leigh, an RBC banking diversity manager at a networking event. It was one of several networking events he’d attended. They discussed a number of different options, including his degree from Dubai and his work to get a complimentary degree from York University. He shared his interest in commercial banking and passed along his resume.

The commercial banking role was very close to his background in terms of qualifications, softer skills and harder skills. He felt that these similarities, along with his entrepreneurial personality, might give him the chance he needed.

Within a matter of weeks, Leigh reached back out to Feizi and he ended up completing three phone interviews as well as a panel interview with three vice-presidents from commercial banking. That led to a job offer, which Feizi describes as his “dream job in Canada”.

How business is done, similar but different
Feizi is fascinated by some of the differences between Canada and Dubai. While the underlying skills are similar, the business culture is different.

“Most of our communications in Dubai was telephone conversations, not through email,” explains Feizi. “Roughly 80 per cent of my communications here in Canada is by email, augmented by telephone and some in-person meetings. In Dubai, it was the opposite with 80 per cent of the work completed through phone calls, with 20 per cent done by email or traditional mail. So, it’s very different here.”

Not surprisingly, he’s also noticed differences in lifestyle between the two countries.

“Both countries are multicultural, but in Dubai there is a heavy emphasis on luxury and doing business with other countries, whereas in Canada, my experience has mostly been doing business in country. The focus isn’t as much on luxury, but on work culture and relationships. In Canada, it is all about networking.”

Feizi also has noticed that the use of social media is more prominent here, commenting that LinkedIn didn’t seem to be as popular in Dubai as it is in Canada.

Feizi is truly enjoying his experiences in commercial banking in Canada and has been able to apply some of his experiences from his job in Dubai with his new job in Canada, while also noting significant cultural differences. It’s an invigorating experience.