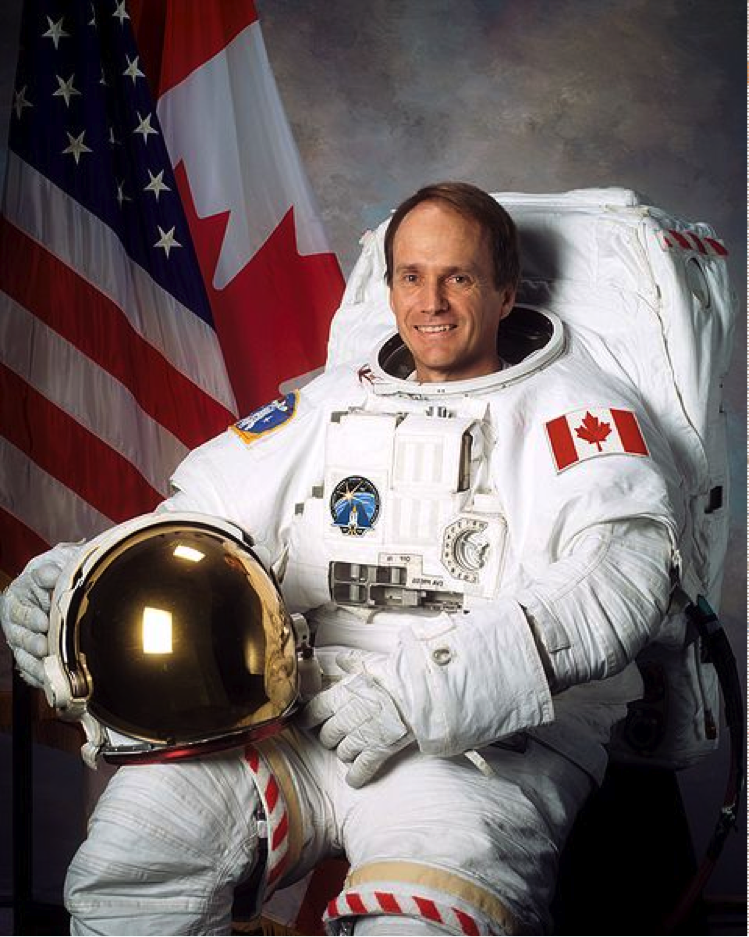 Steve MacLean (BSc ’77, PhD ’83, D.Sc ’93) has gone to greater heights than any other alumnus to date—literally! An astronaut and influential member of the Canadian space community, Dr. MacLean began his incredible journey right here at York.

For ten years Steve was an active presence on campus. He received his Bachelor of Science (Honours) in 1977 and doctorate in 1983, both in physics, and was awarded the Murray G. Ross Award in 1977. From 1974 until 1976 Steve worked in York sports administration and public relations, and taught part-time on campus from 1980 until 1983. During this time he also competed with the Canadian National Gymnastics Team (1976 to 1977), and became a visiting scholar at Stanford University under the renowned laser physicist and Nobel Laureate A.L. Schawlow. A laser physicist himself, Dr. MacLean’s research has included work on electro-optics, laser-induced fluorescence of particles and crystals, and multi-photon laser spectroscopy.

Selected as one of the first six Canadian astronauts in December 1983, Steve began astronaut training in February 1984. From 1987 to 1993, he was the Program Manager for the Advanced Space Vision System (ASVS), a computer-based camera system designed to provide guidance data that enhances the control of both Canadarm and Canadarm2, and the Laser Camera System (LCS). From 1988 to 1991 he also assumed the role of Astronaut Advisor to the Strategic Technologies in Automation and Robotics (STEAR) Program.

From October 22 to November 1, 1992, Steve flew onboard Space Shuttle Columbia as a Payload Specialist for Mission STS-52. The journey made him the third Canadian ever to go into space. Following this mission, Steve became the Chief Science Advisor for the International Space Station (ISS) from 1993 to 1994. He was then appointed Director General of the Canadian Astronaut Program for two years. Later, he served as CAPCOM (Capsule Communicator) for both the ISS Program and the Shuttle Program, at the Johnson Space Center.

Steve went to space for the second time on Mission STS-115 in 2006, and served as mission specialist on Space Shuttle Atlantis acting as flight engineer and robotics lead. He became the first Canadian to operate Canadarm2, and the second to walk in space.

Upon his return to earth, from 2008 to 2013, Steve served as president of the Canadian Space Agency (CSA). In 2013 he returned to physics research as an associate member of the Institute for Quantum Computing (IQC) at the University of Waterloo.

Steve is married to Nadine Wielgopolski and has three children. Of his York experience, Nadine says her husband is “very proud.”

“Everywhere he goes, when he has a chance he talks about York,” she says. “It made him a good part of who he is now. He recognizes that, and the excellence of the teachers he knew there. And the camaraderie with the students, and with his former gymnastics friends, is very present in his life still. So it’s been an incredible experience for him. Ten years at York—you just cannot forget that.”